It was a feeling of ultimate vulnerability!

I was up at the Shuswap this past weekend, Sicamous to be exact. Now, for those who may be geographically challenged, or have never driven through the BC interior to the Rocky Mountains (a travesty, IMHO), Sicamous is on the Trans-Canada highway, smack in the middle between Vancouver and Calgary. It’s also at the junction where Highway 97, that north-south route that runs through the Okanagan, meets the Trans-Canada. It is, essentially, a T-intersection.

I was up there on duty, preparing my houseboat for a season on the two lakes, on whose narrow connecting channel the marina sits.

Thursday night we’d had a large thunderstorm pass through. It had been fun watching the lightening over the water. Friday had seen occasional rain showers, including one very severe, but short-lived, storm.

Saturday morning I awoke to tranquil waters and the beckoning calls of loons and ducks. This day should be a good one for completing the myriad tasks that still lay ahead, including a spin on the lake. 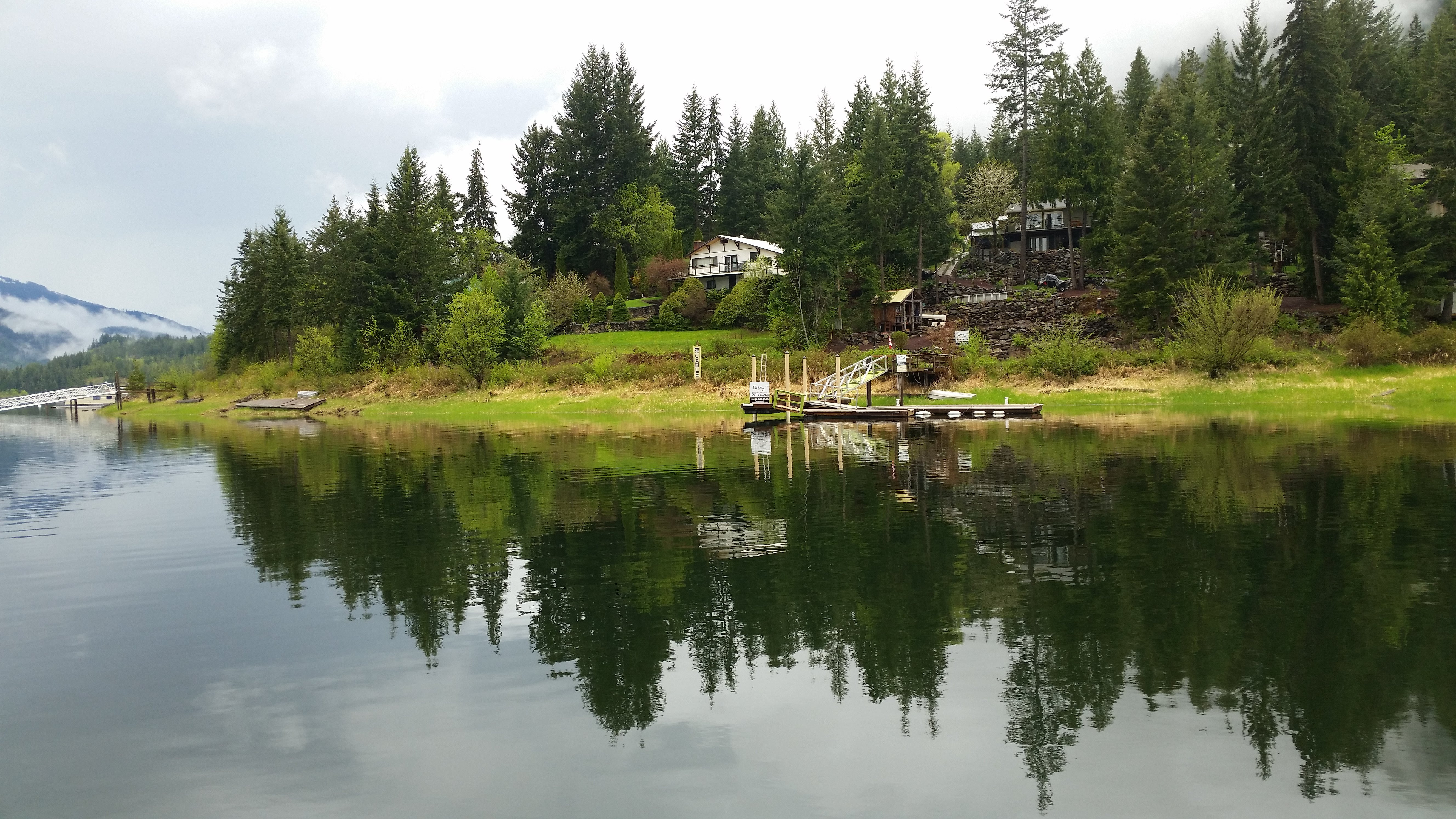 Shortly after the 8 am posted opening of the marina office, I found myself there for some supplies and information. There was a note on the door that the office would not be open this day, and a number to call. I called, left a message. Puzzled though, I headed back to the docked boat.

A short while later, a neighbour dropped by with the news: Mud-slides due to the heavy rains had blocked all three access roads to Sicamous. We were, literally, an island, cut off from the rest of BC.

Wow! Who’d have thought!? When I drive the major highways through the mountains, I’m always impressed with the engineering feats they represent, the cut-and-fill patterns along the mountainsides, and the geotechnical barriers created between the roads and those self-same mountainsides.

But this reminded me how minuscule our best engineering efforts are when stacked up against the machinations of Mother Nature. When it’s us against her, we don’t stand much of a chance, even when it’s not on the scale of a Hope Slide or a Frank Slide.

OK, our predicament wasn’t that serious! By the time we headed back Saturday evening, one traffic lane had been opened, the long line-up of waiting rigs that had filled Sicamous, had been cleared, and we breezed through. The inconvenience of a closed shop, meanwhile, had not been that monumental, either.

Those who live in flood-prone zones experience reminders of Nature’s fluvial power more frequently. Those who actually live on islands identify with being hemmed in when Nature unleashes her wrath. The people of Fort McMurray, Kelowna and Barriere know what it’s like to face the vulnerability of advancing flames.

But those of us who live in highly developed urban areas rarely experience such vulnerability to the forces of Nature. We may imagine a time when an earthquake may change that. But, until something actually does happen, we tend to under-appreciate our dependence on a good mood by the natural forces that surround us.

Perhaps it was always that way! Perhaps there were previous advanced civilizations much like ours that simply succumbed to the natural forces around them. Who knows?

It’s something to speculate about when one is doing the (otherwise) no-brainer work of scrubbing down the upper deck of a houseboat!

By the time you receive this post, we should know the election results. There is a slight difference in perspective between the two main parties when it comes to owning vs renting, as noted last week. Their stances, though, will probably not affect the rent 2 own market much. For those who want to achieve home ownership, each will bring slightly different challenges to successfully getting there. Neither is insurmountable.

If you don’t qualify for a mortgage now but are within shouting distance, a rent 2 own program can help you understand and navigate the challenges of getting there. We truly are a program to help you achieve mortgage-ability; we are not real estate investors who are trying to find a way to flip a property. In fact, we will only accept anyone into the program whom we feel is poised for a successful outcome. It must be a win-win-win scenario for us to enter a rent-2-own contract.

Quote of the Week:
Continuous effort – not strength or intelligence – is the key to unlocking our potential. – Winston Churchill