Those moments in our lives

Whether or not you were among the 11.5 million Canadians who watched the Grey Cup game on Sunday, you’ve likely picked up the story-line. 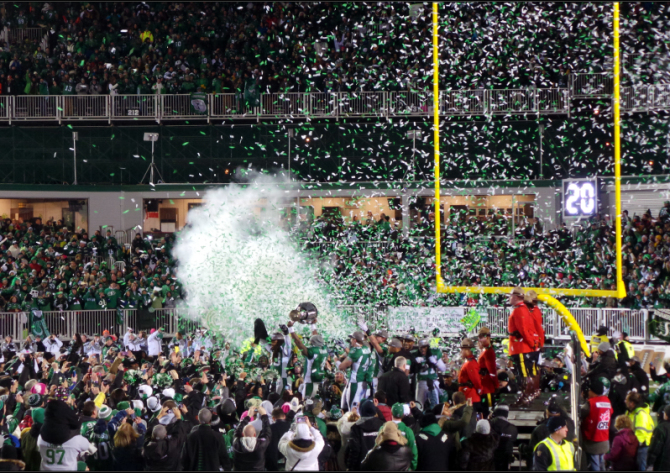 Saskatchewan, smallest market in the league but with the biggest fan base; home team for this 101st Grey Cup; only the third time Regina has hosted the big game, this being the last before the legendary stadium is demolished for a shiny new one; the Roughriders having won the Cup only three times before despite the Cup’s 100-year history; plus, a team put together to win this year, Geroy Simon, a star from these parts, a big part of that effort; a chance for redemption for the Roughriders and quarterback Darian Durant, who lost back-to-back Grey Cups in 2009 and 2010 in heart-breaking fashion.

The expectations were sky high for this team and their fans sprinkled across Canada—the Roughriders apparently are everyone’s second-favorite team, if not their first. But they’d ended the season second in the West, and had had to upset Calgary even to get to the big dance. Now, the pressure to win was immense.

The week-long party even more immense!

Then there was Hamilton, the other team in the game, though people could be forgiven for not knowing that. No fanfare, almost no fans, a team that had risen from last place just to get here, a team given little chance. For this party, they were an after-thought, at best.

But the majority didn’t care about that. This was an event of a lifetime, every moment of it to be savoured. Every moment to be lived to the max.

If you saw the stadium on Sunday, it was a sea of green, probably 44,000 of the 44,710 fans clad in Roughrider green. Just a few specks of black and gold.

And when the game ended, the right team having won decisively, the fans stayed, for hours. No one wanted this moment to end. The ghosts of 2009 and 2010 had been exorcised! The home town was vindicated. And every one of those fans believed they’d been a part of making it happen.

“You really had to be there,” the commentators said, “to understand.”

Not me. I understood. I grew up in Saskatchewan. I, too, bleed Rider green.

I’d seriously contemplated grabbing a scalpers over-priced ticket and driving out to be part of this once-in-a-lifetime event. But alas, reason had prevailed, and I’d stayed home, to pick up whatever I could through TV and online coverage. I watched the game with other Rider fans clad also in green. And I, too, will forever cherish the moment, even if I wasn’t at the party in Regina.

For Saskatchewan fans, it was comparable to the Gold medal hockey game at the 2010 Olympics.

Celebratory events have been a part of human cultures throughout history. The “Rider Nation” just happened to have one of their own on this occasion. So, what meaning do we derive from extraordinary events like this? Are they simply tension-releasers from the stresses of life? Or do they propel us to new hopes and dreams?

It’s my opinion that they serve a useful purpose. Whatever our passions, corporately or individually, we need to have occasional successes to encourage us to keep going, to reach greater heights and bigger dreams. And when they do happen, even if only 4 times in 101 tries, we benefit by celebrating them big time!
Ron