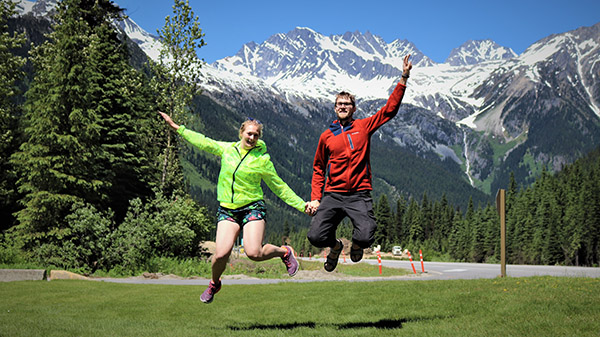 The question came from the British friend who was accompanying our first packaged tour through BC to the Rocky Mountains. A professional photographer, she just couldn’t stop saying “Wow!” as we took in the breath-taking scenery along the Trans-Canada Highway. (There’s a reason Lonely Planet named the Rocky Mountains “the No. 1 most spectacular natural attraction in the world.”)

I think the question came somewhere in the Rogers’ Pass area; we hadn’t even gotten to the Rocky Mountains yet. “Just wait until you see them!”

Her appreciation for the ever-unfolding picturesque landscapes was echoed by the other Europeans in the group.

Then, there was me. I’ve travelled the route countless times. I know what’s around the next corner.

That’s actually why I’d put this trip together. I know how the scenery blows people away. It’s blown me away since childhood. I know how much I appreciate it anew each time I travel through the area; it never gets old.

But, does the “Wow!” factor eventually fade?

I had to ponder the question. I had to admit that, even though I appreciate the wonder of these scenes over and over again, their impact may be less than it once was. But, considering how often I’ve repeated this itinerary, it’s still probably weakened only marginally. Let me repeat: I appreciate it anew each time I travel through the area; it never gets old.

I had to wonder, though: Are there some things that give you that great feeling of appreciation only the first time, and others that give it to you repeatedly? And what differentiates between them?

This weekend I had dinner with a friend near Vancouver’s convention centre. We’d lucked out and gotten an outside table overlooking Coal Harbour, the marina and Stanley Park. We sat in awe at the gorgeous setting as we watched the sun gradually retreat in the West. I took several photos.

My friend practically lives in the area. But it seemed she was as impressed as I over the surroundings in which we were set, maybe even more so.

Some things may get old. But others you just appreciate over and over again.

Interest Rates are going up

As I write this, the era of cheap money is about to get some brakes put on. Interest rates are finally rising.

What does this mean for home-buyers and rent 2 own clients? I can only speculate, but here are some of the things that I think may ensue:

1. Higher rates make it tougher to qualify for a mortgage and reduce the value of property one can qualify for. However, in this situation, I don’t think the rise will hurt too much. The reason is that, because interest rates have been so low and the government felt the need to protect consumers from getting too deeply in debt, they implemented a policy last year that consumers needed to qualify at the “5-year posted rate,” not the current contract rate. That rate has been 4.64%, despite current rates of about 2.75%. The damage was done when that policy came into place, reducing the value that buyers qualified for by over 20%

If current rates go up, that does not mean that the 5-year posted rate will go up. They are quite independent of each other. As rates rise, the gap between the two should narrow. If they go up enough, there should be no need to continue with that policy, especially if the two rates merge or the posted rate goes below the current rate.

2. A rise in interest rates usually puts a damper on rising home prices. In this case, I expect any such influence will be minor. Prices tend to follow the old fashioned “law of supply and demand.” In the bigger picture, there is a tremendous shortage of housing stock. With demand exceeding supply, the pressure for prices to rise will remain, with higher interest rates moderating them only a little.

3. There will be a quick spike in deals and a rush to close them quickly. Any modest increase in interest rates tends to trigger a quick reaction, as many see it as a portent of more increases to come. Those who have been waiting to see what the market will do, jump in quickly at that point. The rush creates a temporary spike that quickly drops back to the normal trend.

We may not see the housing prices keep increasing in the 30% range that we have over the past two years but I predict that modest interest rate increases will not have a drastic effect on the market.

But, to hedge bets, it would likely be prudent to make home-buying or rent 2 own decisions quickly.

Quote of the Week:
Take a chance! All life is a chance. The man who goes farthest is generally the one who is willing to do and dare. – Dale Carnegie