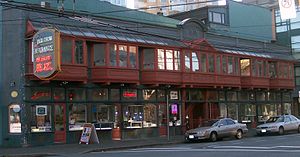 My family knew me well. They knew I couldn’t resist books about places to see before you die.

So, there it was in my Christmas stocking: 101 Places Not to see Before You Die (by Catherine Price).

Some of the entries are just logical: “Hell,” for example (a small town in Michigan that specializes in puns about hell). There’s “A North Korean Gulag” and “Naked Sushi in Japan”—raw fish served on a nude woman. Another one: “Amateur Night at a Shooting Range.” Enough said.

How about Picher, Oklahoma, a ghost town where the government paid everyone to leave because it sits on huge deposits of lead and zinc? Or “The World Bog Snorkeling Championship,” the “Seattle Gum Wall,” or the “South China Mall” (that is virtually vacant), or “Garbage City,” or “The Great Pacific Garbage Patch”? There’s also that bathtub filled with beer in the Czech Republic.

But, some places would probably be offended to know they made the list. Times Square on New Year’s Eve? Mount Rushmore? Stonehenge? Nevada?

I could only find one Canadian attraction that made the book. But there is was: “the world’s skinniest building,” the Sam Kee building in Vancouver (though the “Skinny Building” in Pittsburgh also presses that claim.)

But, here’s the thing: we humans seem to have this urge to see and participate in things that are totally unique. We hear about strange or crazy or dangerous things, and we just want to get there, or experience them ourselves. Expeditions to Mount Everest, for example, exploded after the book Into Thin Air chronicled the disaster that befell the climbing parties in a freak snowstorm in 1996. Heightened risk makes the place attractive? Maybe you want to go to Hell, Michigan, just because you’ve now heard about it. Or get your sushi served on a naked body.

The book offers some winners in that regard: “The Road of Death,” for example. This is the road in Bolivia often considered to be the most dangerous road in the world. It’s been rebuilt, but the old road course (originally built by Paraguayan prisoners of war, many of whom died in the construction) is now a cyclists’ haven, the most popular tourist experience in La Paz. I almost did it myself when I was in La Paz but ran out of time. But, if you’re not careful, it’s death.

Then there’s “Kingman Reef,” one of the most remote reefs in the world, but also one of the most pristine and beautiful. The book includes “The top of Mount Everest.” And “Cusco (but only if you’re albino).”

I have my own list of top 10 most spectacular places I have visited. And I have to admit, not all of them are that beautiful or remarkable. Some are just unique, so that I can say: I was there!

Most of our bucket lists, I’d venture to guess, contain some similar items; not spectacular or beautiful or the greatest adrenaline rush or the ultimate pleasure or satisfaction, just something that suggests: “I was crazy enough to do that, or go there,” or “I went to the edge, and survived.”

(Now you’re going to go look for that skinny building in Vancouver, aren’t you?)

Rent 2 Own Tip
I’ve written it before, but it bears repeating: There are four main things you need to demonstrate to a lender to qualify for a mortgage:
1. Enough down payment, plus extra funds to cover closing costs;
2. A high enough credit score to assure them you are a good credit risk, and that score is dictated by federal regulation;
3. A high enough income to convince them you can make your mortgage payment (together with other housing expenses), also federally regulated not to exceed a prescribed portion of your gross monthly income; and
4. assurance that your income is fixed or, at least, stable.

If you’re deficient on any of the four, you will not get a mortgage. Rent 2 own programs exist to help you fix those issues where you are deficient, while you are already living in the home you will qualify for at the end of the program. The good news is that, even if you face more than one of those issues, they can all be solved simultaneously.

Quote of the Week:
To be heroic is to be courageous enough to die for something; to be inspirational is to be crazy enough to live a little. – Criss Jami