So, what labour did you do on Labour Day? 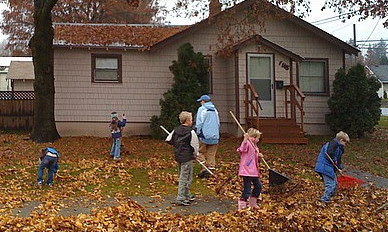 Labour Day always prompts mixed emotions for me. For the twenty-five years I spent in school, it was the last day of summer, of freedom. It was sad!

But since I was embarking on something totally different, and because I liked school (why else would I spend twenty-five years there if I wasn’t flunking?), it was also anticipatory of a new beginning. I spent the day readying myself for that new challenge.

I suspect it’s still that for many who are students—and their parents. Unless they hate school and return only out of obligation. (Then, it’s just for the parents, I guess.)

I learned from young, though, that it was “Labour Day,” because it was the day to work around the home and yard—put away all the summer stuff, rake the lawn, clean the yard. It was the end of summer, the start of Fall—get ready for hibernation. Growing up on the prairies, the timing was certainly appropriate.

But then, looking out the window today, it seems appropriate for here in BC, too. And it feels like Fall. How many people put away their summer toys over the weekend, or spent it claiming the last vestiges of their summer activities and habits?

I heard ads from the Labour Unions reminding us that we should take a moment to remember their contribution on this Labour Day. Sure, why not? Perhaps I’ve had it wrong all along. Maybe the day was intended for them from the start. But whether it was or wasn’t, if I was a union person and had the opportunity to promote labour on Labour Day, I’d do it, too. Good on them!

Somewhere along the way, I also heard that this was the day on which we were supposed to plant a tree, reminding ourselves that our path to modernism came through (and maybe still depends on) the toil on the land.

At this stage in my life, though, Labour Day is not a big deal. I just have to remember that there is a lot of business I can’t do on that day; I’ll be doing double duty the next day.

For some of those on the other side of my challenge, I suppose Labour Day is just another holiday from work–a break from labour, if you like. Ironic, for them, that it’s called “Labour Day.”

So what was Labour Day to you?

I think most holidays are celebrated moreso because they’re holidays than because of their connotations. Do we really celebrate Family Day to reflect on family, or mostly to have a holiday between New Year’s Day and Easter? Ditto with BC Day.

For many, Labour Day marks the start-up of a new season of activities. Or a return to a more structured life after a laid-back summer lifestyle. On this Labour Day, I got an email: “Calling the brothers . . .,” a reminder from the organizer of a group of guys who meet periodically, at least during the nine months from September to June, that another season of stimulating interaction is upon us.

So, if we really want to describe accurately the variety of things that so-called Labour Day means to us, how about we change the name? How about calling it “Transition Day?”

That, at least, would describe the broad scope of activities that mark this weekend on the annual calendar.

Rent 2 Own Tip
How much money do you need for a down payment at the banks? Officially, you can get a mortgage with 5% down. That’s down from where it used to be when the economy was stronger and interest rates were higher. You used to be able to get mortgages for 100% of the value of the home, if you qualified.

Now, even 5% is a stretch. Because interest rates are low, it’s easy for people to over-extend themselves. So the lenders, at the control of CMHC and the direction of government, have upped the criteria required to get low down payment mortgages. For those with stellar credentials, 5% down is still possible. For others, 10% is the minimum threshold.

Most who enter Rent 2 Own programs don’t fall into the “stellar credentials” category. If they did, why would they need Rent 2 own? So, to avoid the likelihood of disappointment at the end, we no longer aim for the 5% down figure but for the 10% threshold. On top of that, closing costs amount to 1.5 – 2% in BC.

So, if you enroll in our Rent 2 Own program, the plan will be to accumulate a savings component of close to 12% by the end of the term. It’s for your protection.

I would be cautious of anyone who promises to get you a mortgage with less than that amount.