Seize an opportunity, but don’t get wet! 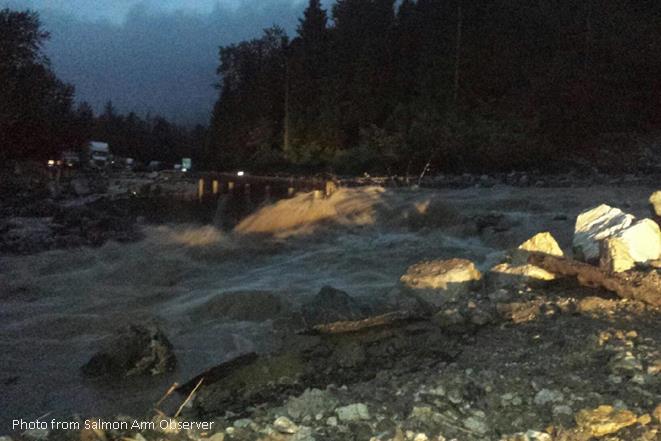 The plan had been carefully crafted: drive to Sicamous Thursday night. Stay over, do some work on the houseboat Friday morning. Leave early afternoon for Sylvan Lake (Alberta—half ways between Calgary and Edmonton), arriving in time to meet colleagues and still get a decent sleep before the two-day conference starting Saturday morning.

Early Friday, over breakfast at Tim Hortons, I overheard people talking about a complete Trans-Canada Highway closure between Sicamous and Revelstoke. Good thing I’d chosen Timmy’s; where else would you pick up the latest on highway closures? It was all the talk here.

I confirmed with Drive BC. I talked to the truck-drivers who were accumulating here. I looked at their pictures of the wash-out. Sure thing: it would be days before the highway was reopened.

I figured I knew better. What about the Forestry Service Road off the Mabel Lake Rd that extends east from Enderby? No, I’ve never taken it. But I knew it ended up back on the Trans-Canada highway just after the blockage. Why not? And, since authorities were stopping west-bound traffic at Golden, to avoid massive piling up in Revelstoke, the highway would be bare of traffic, not crowded like the alternative routes they were advocating.

I finished my work, stopped at the RCMP station to enquire about the route (they knew nothing, but were simply advising people to go via Jasper), gassed up (someone at the gas station had heard that the FSR was closed), and decided to try that route, anyway. Everything else was too long to warrant the effort to attend the conference. If I didn’t get through, I would simply abandon my quest to get to the conference, and chalk it up to another exploration into the back-country of BC. Why else had I bought a 4WD in the first place?

At the start of the FSR several vehicles were accumulating. A sign said the road was closed at Wap Lake. But no one was stopping traffic—and their GPS’s had led others to this route. (Surely, google would know if the road was closed!!) Should we try it? A service worker came along, informed us that he’d also heard about a blockage but couldn’t confirm.

We were about to abandon the idea when a vehicle came up from that direction. He’d just come through the route and said that, though there was water over-flowing the road, it was doable with our vehicles.

Three of us looked at each other, decided there was strength in numbers, and we’d do it together. The FSR worker gave us directions and tips. I then led the way, as I had the map book.

Fifty kilometres later, we came to Wap Lake. There, in a dip in the road, we encountered substantial water. But, no big deal, we whipped on through. Then there was a second—and a third. None had been too bad. We were relieved!

A kilometer or two later, now past Wap Lake, I rounded a corner and suddenly found myself in the middle of a rushing stream, against the current. “Where had I lost the road,” I wondered? “How is it that suddenly I was travelling up a stream bed instead of on an FSR?”

“But I must still be on the remains of a road,” I reasoned. “I must carry on.” The water got deeper, but never too deep. It was a bit scary! “Perhaps the (now river) had washed out the road bed, leaving a hole! Surely the driver who’d encouraged us had not had to encounter this!” I pressed on, though; what else could I do?

Perhaps a hundred meters later, around a slight bend, I saw the road rise back out of the stream. I made it, then shortly stopped to see how the others had fared. Moments later, the mini/crossover van following me also emerged from the stream, and then the pick-up truck.

A few minutes later we reached the end of the FSR at the Trans-Canada Highway. Three hours after leaving Sicamous, I’d reached what would have normally taken 30 minutes. We stopped, high-fived each other, and carried on our merry ways.

The entrepreneurs’ conference was a lot about seeing—and seizing—opportunity. To get ahead, one must not be timid, but alert to opportunity and creative in meeting it.

Somehow, I felt I’d already taken the lab for that class.

If you don’t like where you’re at, move. You are not a tree. – unknown