Lessons from a house-boating weekend

When you run a small business renting out your houseboat from a base five hours away, it can become a bit tedious. It is a lot of work. And, when do you get to enjoy it yourself?

Well, the answer is, “when you have a weekend that no one else has booked.”

So it was that I hurriedly arranged a trip with a collection of friends to enjoy a short weekend on the water. At the last minute, someone had to cancel, so there were eight of us on the spacious 18-passenger Remote Escape.

It could have gone down as a “not-too-successful” outing:

Consider: Work obligations kept us from leaving the Fraser Valley until 5:30 on Friday; a rush trip got us to Sicamous by 10 pm, far too late to leave the marina before Saturday morning. Work obligations also required us to be back at the dock by mid-afternoon Sunday. It would be a very short weekend.

Consider: Though attempting to enjoy a relaxing outing myself, this weekend also needed to be somewhat of a working one. The boat, having been well used throughout the summer, and with a season of vulnerabilities inherent in boating (think of it as a condo that’s in a perpetual earth tremor when on the water), maintenance and repair needs build up; work needs to be done between all rentals. So my fun weekend would be compromised with work.

Consider: The weather forecast was not encouraging. Cloud was predicted for Saturday and buckets of rain for Sunday.

Despite the short weekend, we spent a relaxed Saturday morning preparing for departure, not leaving the marina early. When we finally left, we cruised up the smaller Mara Lake, to a nearer beach than if we’d gone into the larger Shuswap Lake, with its hundreds of beaches on a thousand km of shoreline. (The boat needed to be beached for the maintenance work I needed to do.) 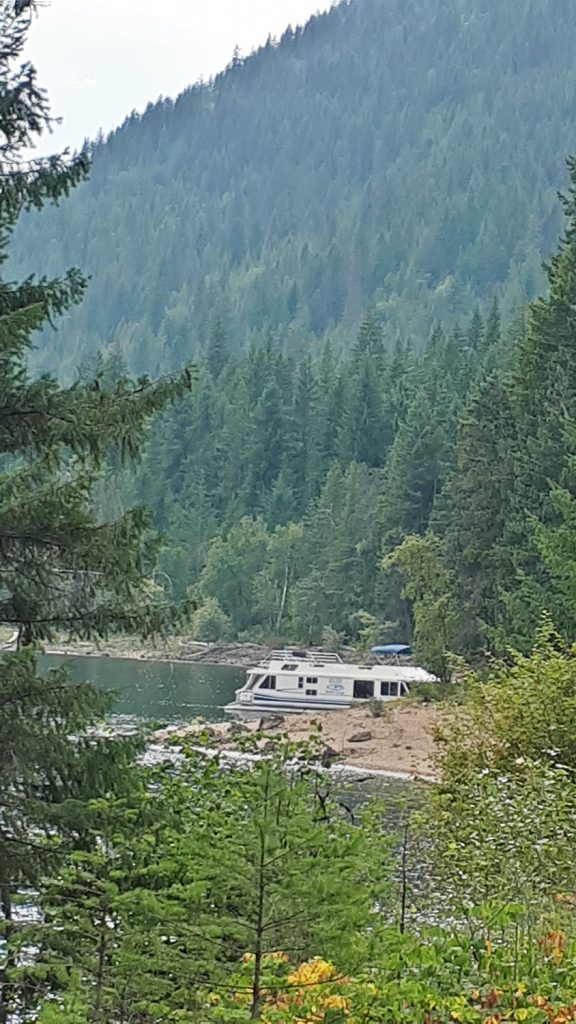 We found a gorgeous little beach and secured the boat. I proceeded to the work. Several friends jumped right in and joined me. It didn’t go perfectly smoothly. But my friends were amazingly dedicated and creative in tackling the job. It became a project that we took on together, and needed to conquer.

I had to phone into town for equipment and arrange a water taxi to bring it out to us. Meantime, we chatted, we ate, we swam in the warm water and in the hot tub, we explored the beach, we took turns in the hammock. The clouds held off; it was a mostly sunny day.

The water taxi arrived; we kept working. Those not dedicated to repairs took over kitchen responsibilities. Repairs completed (as best we could) Saturday’s late dinner was a sumptuous barbeque.

Meantime, teenager Ethan had found a fish-hook someone had left on the boat. A stick he found on shore, and six or seven meters of dental floss, allowed him to test his fishing skills. The first fish he caught was released. The second, too damaged to be released, joined us for dinner.

Afterward, we swam a bit, we walked the shore, then everyone settled in for a table games until late into the evening. What a fun time we had playing, laughing and challenging each other! Friendships were made, or reinforced, in the interaction. (No individual had known every other individual before we started, as it was a diverse collection of friends.)

We slept peacefully on the waters Saturday night.

Sunday dawned cloudy but without rain. No one was in a rush to get going; a truly relaxed atmosphere prevailed. The clouds gradually built and a few raindrops fell. We cruised the lake a bit before heading back to the marina by 3 pm.

The weekend debrief reinforced that everyone had had a great time!

And I was reminded—again–that, it’s not about the rush, or the weather or the tasks that defines the value in a weekend like that. To some degree it’s the peaceful natural setting, but too a far greater degree, it’s the friendships that are forged and reinforced, that makes these experiences—and all of life, for that matter—worthwhile!

I’m reminded to never underestimate the value of shared experiences with friends.