Lessons from a championship curling team

Last week many Canadians watched portions of the Brier, Canada’s men’s curling championship. I was one of them.

There were many good story-lines around the event, but perhaps the most intriguing concerned the team entered as “Team Canada.” Let me explain.

Each province sends a representative to this championship. For the first time this year, last year’s champion also got a free pass into the tourney. Only trouble was, last year’s team was no longer together. Kevin Koe, the skip (leader) of last year’s team had parted ways with his team-mates and formed a new team (and subsequently represented Alberta at this event). The rules state that three members of last year’s team must be the same in order to get the free entry.

So Koe’s three team-mates from last year recruited John Morris, who’d skipped the team they beat in last year’s final but who had planned to take a partial break from curling this year, as their skip. Thus they were eligible to enter as Team Canada.

Perhaps because of a poor fit, or perhaps because of their limited play together, they got off to a poor start. A team meeting after a 2-3 start led to a switch of strategy. Morris and third Pat Simmons switched positions, Pat taking control of the team.

The switch was genius. They went 8-1 the rest of the way, and beat our Olympic gold medalists in the final, to win the championship again, and remain Team Canada. They will represent our country at the world championships later this month, and get another free pass to next year’s Brier. 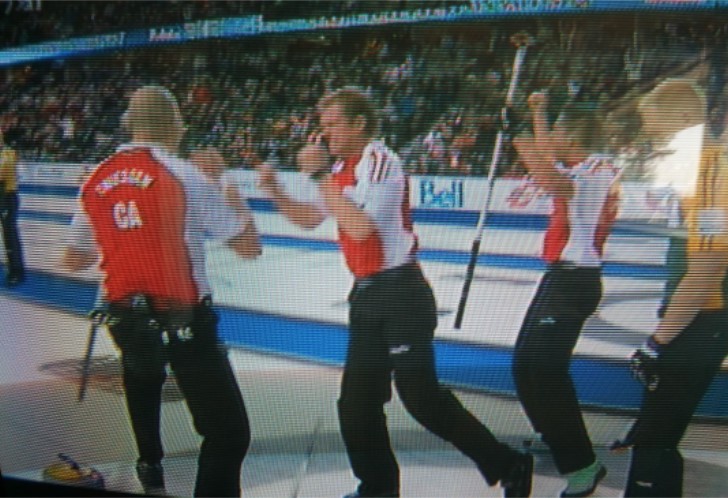 The lessons are powerful.

Sometimes it is just a small change of direction or strategy that is the difference between failure and success. It was the same four players, but a switch in the roles of just two of them that turned the whole team around. Yes, commentators affirmed, Morris and Simmons did strategize slightly differently and when Simmons had final authority his strategy prevailed.

Someone has said, “Insanity is doing the same thing over and over, and expecting a different result.”  From this championship team, we learn the importance of finding creative alternatives when things aren’t working as planned. More than once they faced adversity, but they did not let adversity derail them from their goal. Instead, they found creative ways to adjust, within the rules, to achieve their goal.

And finally, perhaps the biggest take-away is the importance of parking your ego at the door for the sake of the team. It must have been tough for Morris to give up the leadership role, to fully support Simmons all the way, despite differences of opinion on strategy, and to switch back to sweeping instead of calling shots. But ultimately, his support made him a champion. It will be Simmons, not Morris, whose name goes on the trophy as skip of the winning team. But Morris’ name will also be on it; it wouldn’t have otherwise.

I think those lessons are applicable in all of life, whether in a workplace environment, a social environment, or even a family environment.

Rent to own tip:
There is a myth that you have to wait seven years after a bankruptcy before you can apply for a mortgage. This is not true. If you are serious about rebuilding your credit, you can get a mortgage in 2 – 3 years after a bankruptcy. That is also true for a Consumer Proposal; you can get a mortgage 2 – 3 years after it is paid off. Fraser Valley Rent 2 Own can work with your situation as soon as the bankruptcy is discharged or the Consumer Proposal paid off, but not sooner. However, if you have a second bankruptcy, you will not likely get a mortgage for many years and perhaps need a very large down payment. Fraser Valley Rent 2 Own cannot work with you after a second bankruptcy.

What lies behind us and what lies before us are tiny matters compared to what lies within us. – E.C. McKenzie