Is the housing bubble about to burst?

I heard it again on the news this morning, some headline about, “Is the housing bubble about to burst?”

The easy answer is “No—at least not in this area.” That’s because there is no “bubble” right now. A boom, Yes, a bubble, No.

I support that with an article I read yesterday in the Canadian Real Estate Wealth magazine, by well-researched realtor and investor AJ Hazzi of Kelowna. He was arguing with respect to the Kelowna market, but his arguments might as well have been for the Fraser Valley, as our market conditions are similar to theirs.

Here’s why Hazzi says his market is not in a bubble.

First, the market is not speculative. For example, in October 2007 (the height of the last boom), there were five times as many people purchasing with the intent to re-sell within a year, as now. People, today, are, by-and-large, not purchasing their properties to flip them.

Second, during the last boom, the labour market was in trouble, with people heading out of the province to find work (largely in the Alberta oil fields). The opposite is the case now, as jobs are not only coming back to BC but are also being created here. Housing demand has a strong job growth market to support it.

Third, money lending policies are extremely tight right now. In the last boom, mortgages were easy to come by, with terms up to forty years, little due diligence by the lenders, and income accepted as “stated” by the applicant. Now the approval process is incredibly thorough: some mortgages are a maximum of 30 years, but many only 25, down payment sources are scrutinized, income sources thoroughly examined, much higher credit scores required and, although interest rates are still low, qualification rates (otherwise known as the “stress test”) are not. The lenders, at the directive of the federal government, make it extremely difficult for buyers to get themselves into trouble.

I would add two more factors to his. First, non-mortgage debt is not high, and the default rate extremely low, as also reported in this morning’s economic news. Contrary to what the doomsayers would have us believe, most people are responsible borrowers, protecting themselves from outrageous debt obligations. The occasional out-of-whack property sales that get the headlines, surely do not represent the whole market. As the non-mortgage debt statistics suggest, most buyers are not stupid.

And finally, the rapid rise in housing prices over the past two years in the Central Fraser Valley (Abbotsford-Mission-Chilliwack) is largely catch-up. Unlike what was happening in metro Vancouver over the previous seven years, the market here was stagnant. Previous to 2008, we tended to follow, albeit at a much lower level, in the wake of the metro Vancouver housing trends. For a variety of reasons, that seemed to stop in 2008, as the stylized graph below shows. The dashed line represents what would have happened had we continued the prior trajectory. We are now just returning closer to that path, closing some of the gap that developed between 2008 and 2015. 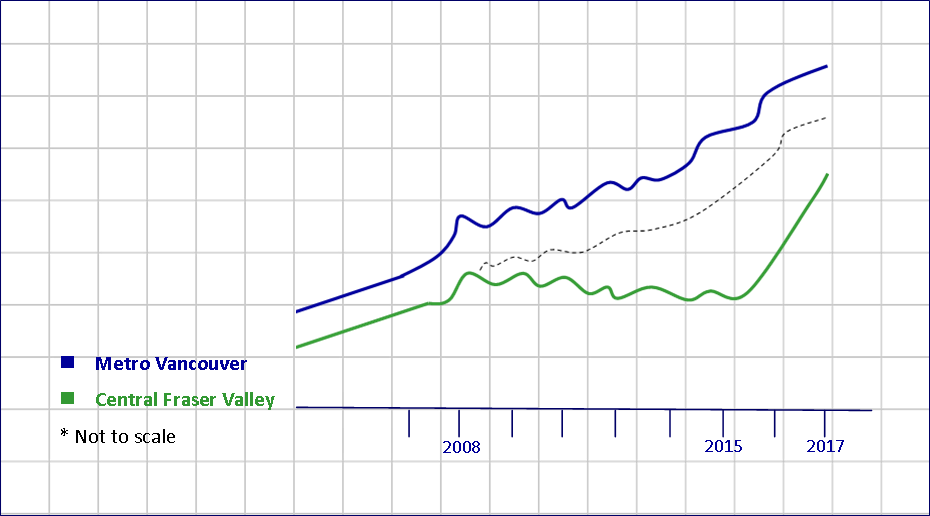 Yes, the housing market always follows a cycle, an upward push that turns into a boom, then a levelling off or even a bit of a slide down, a period of low stability (a buyers’ market) that gradually returns to a rising market that accelerates to another boom. A bubble occurs when the boom is artificial and cannot be sustained; then, instead of a levelling off, the market suddenly reverses to go back to where it should have been without the artificiality that excited the acceleration.

We may be approaching the peak of the boom—no one knows when that will happen. But there is not artificiality in the market, no reason to expect a crash to bring us back to “reality.” What we have now is the new reality. Those waiting for the big reversal, to buy into the market will, I suggest, be waiting a long time.

Quote of the Week:
Don’t ever take a fence down until you know why it was put up. – Robert Frost