Earth Day 2020: The planet is smiling

On my coffee table is the current issue of National Geographic, a subscription I’ve now had for 30 or more years. This month’s issue has a front cover on both sides. On one cover it says: HOW WE LOST THE PLANET: A Pessimist’s Guide to Life on Earth in 2070. The background graphic reinforces that view.

Flip the magazine over. The other cover says: HOW WE SAVED THE WORLD: An Optimist’s Guide to Life on Earth in 2070. The graphic reinforces that view.

April 22 marks the 50th anniversary of Earth Day. The magazine is attempting to look back from the 100th anniversary, to imagine how two contrasting scenarios might play out over the next 50 years. 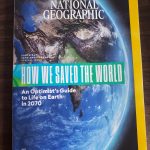 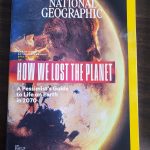 I read the magazine cover-to-cover, fascinated by the path we’ve taken over the past fifty years to get where we are today, and by the prospects that could lead to radically differing future states.

It’s clear also, that many of the dire predictions of that first Earth Day on those California college campuses (where else?) have not come to pass. We have done much better than their dire warnings.

Where are we at in 2020? There are widely contrasting trends occurring simultaneously, some good, some bad.

What is clear, is that the Earth is in such a delicate balance, that the little things we humans do push that fragile balance in one direction or the other. Little actions compound–a snowball effect, if you like–to eventually have a massive impact. The scales could be tipped one way or the other very easily.

The current massive shut-down of our economy, our culture and our movements, is having exactly that effect. Pollution is massively reduced, as revealed by satellite imagery. (Oil prices actually went negative this week because there is so little demand.) The crust of the earth is apparently trembling less with the lack of vehicles, heavy equipment and industry beating upon it. By contrast, seismologists are apparently hearing deep earth tremors they’ve never heard before because the Earth is so quiet.

We see videos of animals now roaming freely where tourists used to push them out. Presumably the natural cycle, less impeded by humans, will cause them to flourish, at least temporarily. One can speculate that the same may be happening with the birds and the sea creatures. That’s all positive for the flourishing of the planet.

Will it last? It’s doubtful. Small adjustments by us when this is all over may reverse this temporary reprieve just as easily as it started. But who knows? Maybe permanent change will set in, partially brought on by the compounding of this temporary effect, and partially brought on by permanent human behavioural changes in the “new normal” that will emerge from this.

How are you celebrating Earth Day this year? Probably in self-isolation.

People are melancholy over the lifestyle adjustments brought on by this coronavirus shut-down.

The planet, though, is smiling.

Did you remember to request your free pre-publication copy of my forthcoming new book: Money Habits for Success: 33 Actions to Survive and Prosper . . . in Any Economy? You can request it simply by replying to financeduc101@gmail.com, and requesting it.