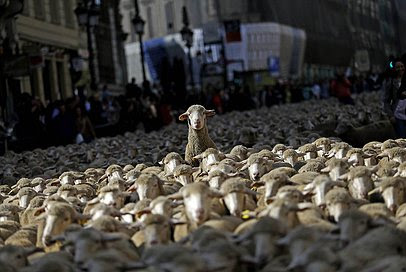 “What should you do in this situation?” asked the teacher in the video I was watching.

He was teaching about the cycle of growth for a business from “invisible” to “power,” and the reversion back downward if you don’t do things right. He was at the early “emergence” stage (“emergencY” on the way down)

“It’s counter-intuitive,” he hinted, then offered the correct answer: “Spend!”

It’s the opposite of what most people do when facing an emergency, he said. They pull back, stop spending.

It got me thinking about the whole idea of counter-intuitive thinking, how it often is a wiser approach than the seemingly obvious.

“Sell when everyone is buying,” say successful investors. “I make money when the market is going down,”  says Warren Buffet.

“Buy low, sell high!” we’ve probably heard a thousand times, and it make sense. But is that what people do? Rarely. They tend to buy when everyone else is buying, which means they’re buying when prices are sky high.

We tend to be more inclined to follow the herd, it seems, as though what everyone else is doing must give it authenticity.

Way back when, when I was studying recreational geography, I read that the only industry that survived the Great Depression relatively unscathed was travel/tourism. Huh? Isn’t travel/tourism the most discretionary product we buy, and the first one we’d let go of in tough times? Apparently not. Talk about going against the flow!

So, in a recent conversation with a travel agent I mentioned that little tidbit. Guess what! She was also fully aware of the fact. Interesting, how incredibly busy travel agents currently are—despite the internet and despite our weak dollar!

So, one of our most discretionary expenditures—leisure—is evidently the one that’s hardest to let go of. Which makes investing in leisure/tourism one of the safest investments, because it is the most recession proof, right? Talk about counter-intuitive thinking in the extreme!

But, hey, it seems obvious that always acting counter-intuitively or opposite of the majority can also be disastrous. Surely, majority behavior is right some of the time!

Which raises the question: when do you act counter-intuitively, and when do you follow the herd?

Two thoughts on that, not unrelated. First, you keep educating yourself, formally and informally, to keep up with the times. That’s also acting counter to the herd, I suppose, who would rather slouch in front of sit-coms than watch Discovery Channel or YouTube seminars.

Second (and, like I said, not unrelated), you keep your ear to the ground—a sort of extremely informal education. Scoop up whatever little tips you can, and plant them in your brain.

It means being curious, and appreciating knowledge.

Rent 2 own means locking in your future buyout price today. It’s a way of hedging yourself in a rapidly rising market and, potentially, getting a great deal by buying way below its future value.

Those who are now successfully exiting rent 2 own deals they entered two or three years ago are buying at prices far below market value and gaining instant equity. We’re so happy for them!

Client-first rent 2 own, the model we follow, is designed to ensure that Everybody wins!

If you don’t have confidence, you’ll always find a way not to win. ― Carl Lewis