I could have sworn the Sun was pink the other day!

For some days previous, it had been orange..

Of course, we all know why that is. The thick smoke from the forest fires further north is hovering over us like a hen over a brood of chicks. The particulate matter in that smoke impedes the direct transmission of the sun’s rays, creating a filter not unlike that used at times by professional photographers.

We all know that the Sun is really yellow.

There is always some particulate matter in the air; it is never entirely pure (even after a good downpour has cleansed the Fraser Valley of the smog build-up that is so common in summer.)

So what colour is the sun’s light really? Scientists tell us it is not really yellow, at all—or rather, it is yellow, pus every other colour. Here’s the explanation from Stanford University’s Solar Center:

It is a common misconception that the Sun is yellow, or orange or even red. However, the Sun is essentially all
colors mixed together, which appear to our eyes as white. This is easy to see in pictures taken from space.
(http://solar-center.stanford.edu/SID/activities/GreenSun.html)

So, the Sun’s light is white, but we normally see it as yellow, and occasionally as orange or even the pink I saw the other night. 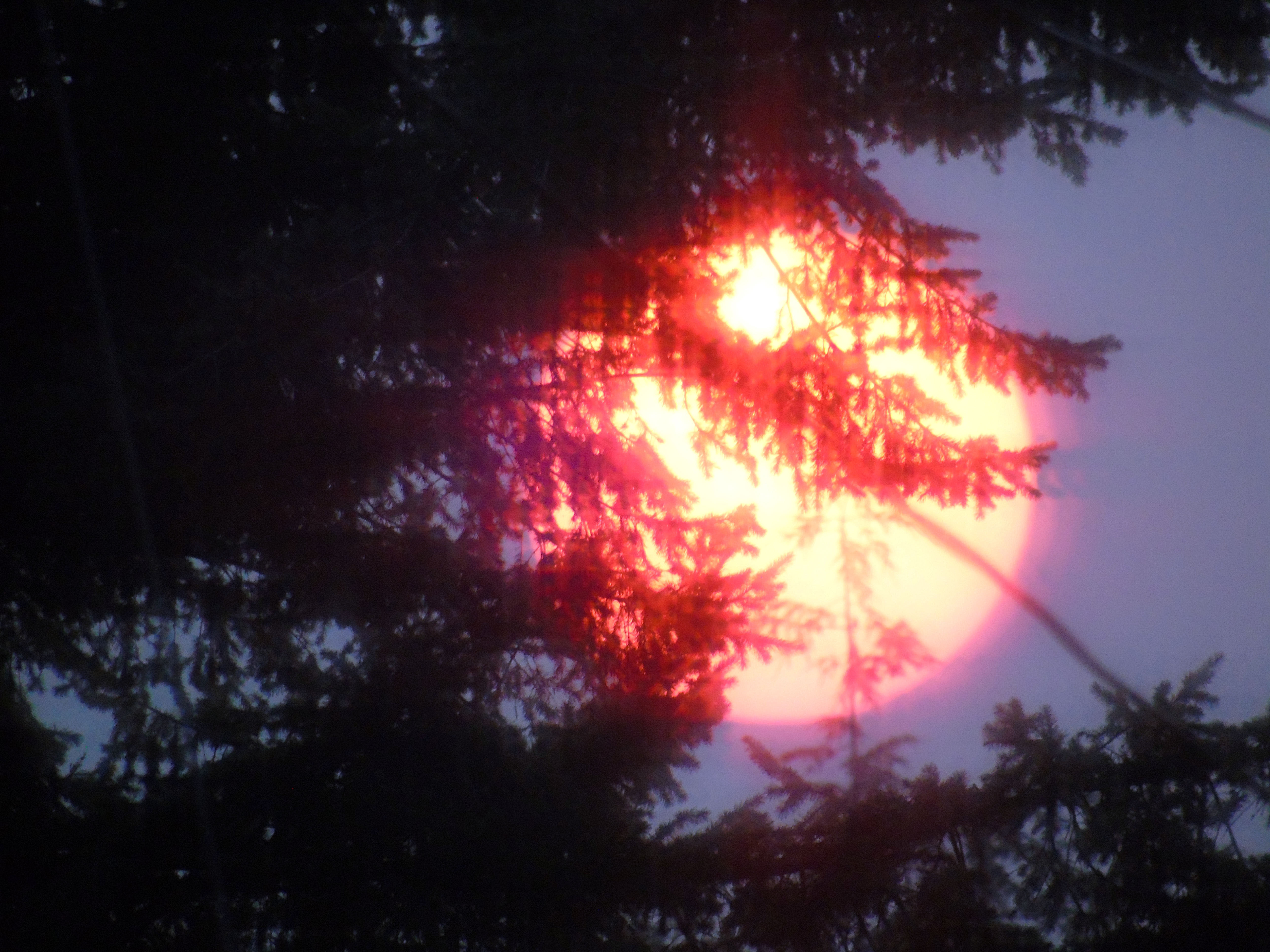 This reminds me of a theme I’ve been pondering lately, namely, how people tend to view ideas and take stands on issues through a grid (or “filter,” if you like), that “colours” their faculties of reason or logic. It’s just like seeing the Sun through a filter.

I enjoy discussions, even arguments, on a broad variety of topics. I have many friends who do, too. Sometimes these conversations lead to a tweak of our own ideas; often we respectfully agree to disagree. No big deal! We simply have differing perspectives that have developed over a long history.

Not everyone, seemingly, can do that. This seems to be especially true of those I call “people with a cause.” Their world revolves around a particular cause to which they’ve seemingly tethered themselves. Now, in itself, embracing a worthy cause is not a bad idea. The world would be a better place if we all adopted and supported worthy charitable causes. Many do.

But, here’s the rub. I find that some people are so caught up in their cause that every discussion they enter is filtered by their cause. They would argue until they were blue in the face, that the Sun really is pink because the filter through which they view it is tells them it is. The filter of their cause determines how they view their entire world. They cannot imagine any other way of seeing it. And they cannot accept any view that sees it differently.

You can’t discuss intelligently with these people, because they can’t separate their cause (the filter) from the specific topic of the dialogue. Any “discussion” quickly devolves to an argument.

Sure, we’re all coloured to some degree through our past experiences, our reading, our education, our interactions with family, friends and the environment. We all, probably, have some sort of filter through which we view the world. But I find that some people can, for the most part, separate the topic of discussion from their personal filters (at least to the point of believing the Sun is yellow, if not white). Some simply can’t.

It’s a pleasure to discuss almost any topic with the former. It’s nauseating to try to do so with the latter.

Rent 2 Own tip
Continual upward pressure on housing prices is pushing single-family home ownership out of reach for many, including many would-be rent 2 owners. The natural switch is to a townhome, and some are making that switch, some more reluctantly than others. This is, of course, pushing up the prices for townhomes, as well.

When we purchase properties for rent 2 own, they need to be “rentable,” because the client actually rents from us for several years before purchasing and getting title to the property. Unfortunately, many townhomes are not rentable, which is creating challenges for rent 2 own clients.

What’s the solution? The easy answer is to accept a condo as a rent 2 own option. Some are reluctant to do so. But, for those wanting to get into the home ownership market for the first time, or those wanting to get “back” into it, this is an option that should be strongly considered. When the lease-option period completes and the rent 2 own client gets title, they are now “in the market.” The condo will likely have appreciated over the lease-option period, just as other properties have, and the new owner may thus already have significant equity in the property on title transfer. There’s nothing to keep them from flipping the condo then, or in the near future and, with their equity, purchasing what they really wanted in the first place.

They can thus use the condo as a stepping stone to get to their dream home. Otherwise, the dream home may be only a distant illusion.

Quote of the Week:
Your assumptions are your windows on the world. Scrub them off every once in a while, or the light won’t come in. – Isaac Asimov