It’s surprising the things one learns when you’re open to it, and keep your “nose to the ground”.

Call me “Curious George,” if you like, I don’t care. But I just like nosing around and picking up new experiences, ideas, and knowledge.

So it was this past weekend. I’d finished my duties at the Shuswap and was ready to head back to the Fraser Valley. Knowing that it was the night of the annual Perseid meteor shower, seeing the amount of smoke in the air, aware that the weather forecast was for some cloud and maybe even a touch of rain, I thought to myself: “Why don’t I delay my trip back, get to the high country around Merritt, where there will likely be less smoke, fewer clouds, and a dark sky, and watch the meteor shower where I have the best chance of seeing some great shooting stars?”

I decided to interrupt my trip in Kamloops (not a place to watch the meteor shower, to be sure.) Striking up a conversation with the server at the table where I initially sat down, I was informed that the place was almost empty because of “Ribfest” happening downtown.

Ribfest? Never heard of it. She told me about the beer gardens, about waiting up to an hour in line for ribs, etc. About the masses of people hanging out in the park.

Gotta check this out! I headed to Riverfront Park and, yes, there were hordes of people. There was the family fun zone. There was the outdoor stage being set up for a band. There were loads of food trucks and food carts.

But, was I ever surprised at what I laid my eyes on! The pictures tell a better story than I ever could. 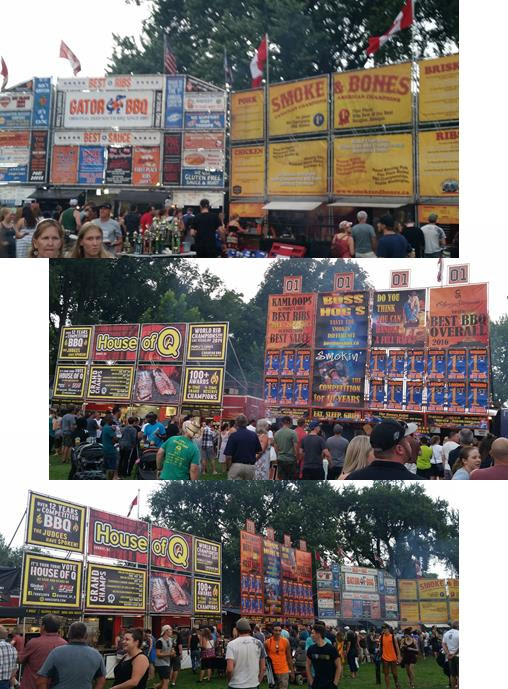 Never had I seen vendors with such massive stands. It’s all about being the biggest, loudest, most in-your-face among the competition. Bragging rights are up for grabs. Get the votes. Win another trophy! Who’s got the most trophies so far? This is high stakes competition.

This is a culture!

Apparently, this happens weekends throughout the summer all over Western Canada, and beyond. Let’s see: “Boss Hogs” won first place in Kamloops, Comox (twice), Pickering, Cobourg (3 times), Kelowna, Calgary Stampede, Pt. Moody, Kitchener (twice), Woodbridge (twice), Esquimault, Penticton, London (twice). But “House of Q” claims 100 awards, including a world championship in 2014 in Las Vegas, plus awards from Langley, Surrey, Chilliwack, Edmonton and Calgary. Langley? Surrey? Chilliwack? How could I be so uninformed?

And that’s only two of the competing teams. There’s also “Gator BBQ,” “Smoke & Bones,” “Prairie Smoke & Spice BBQ,” and a few others (altogether, seven or eight), with their various awards.

Each team has their proud table out front, sporting the many trophies they’ve snagged. Did I say, “in your face?” 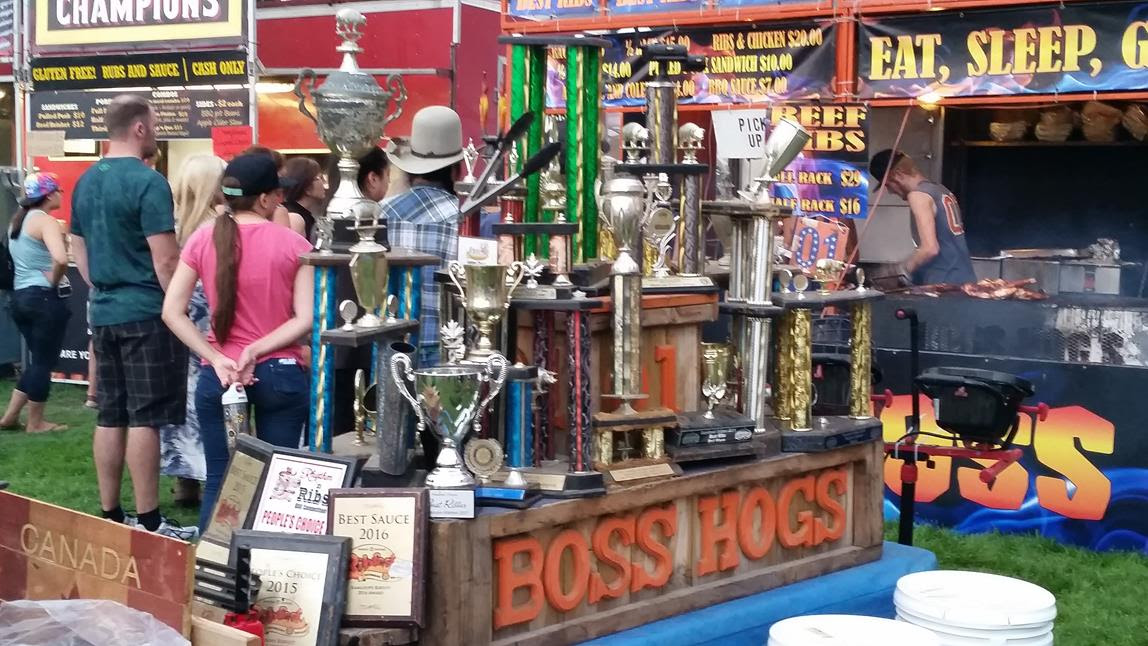 I sat down at one of the hundreds of tables under the tent and casually asked the group opposite me which team had the best ribs. “Boss Hogs,” they suggested.

I headed for Boss Hogs, gabbed a half rack, along with the beans and cole slaw. (Sorry, server at the restaurant, but thanks for telling me about the ribs, instead!)

Call it a cultural awakening.

Call me ignorant, for not having been aware of such auspicious events. (I was aware of Chilli cook-offs, from my days on the Prairies, but not Ribfests.)

But then there’s probably a lot of things, about which I could turn the tables on others, too.

The bottom line is: we all become more aware of the world around us, and better appreciate its diversity, if we keep our ears to the ground and pick up on opportunities that come our way. We enrich our lives because of it.

Oh, and I never saw any meteors. It was cloudy in the high country, too.

Quote of the Week:
Some people drink from the fountain of knowledge, others just gargle. – Robert Anthony